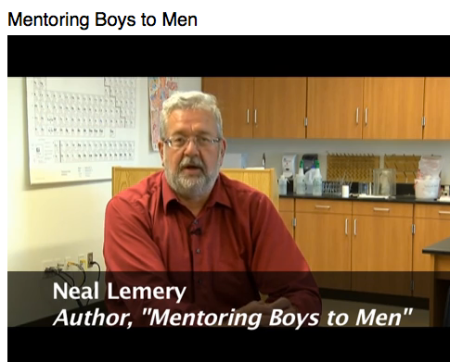 Hear more about the inspiration behind the creation of Mentoring Boys to Men as well as a chapter from Neal’s new book by watching this video. (Give it about a minute to load.)

Author Neal C. Lemery is working on the publication of his book, Mentoring Boys to Men: Climbing Their Own Mountains, ,

He tells the compelling stories of young men in our society, seeking role models, guidance, parenting, and hope for the future.  From his perspective as a judge in a small Oregon community, you are able to explore the hearts and souls of young people you might notice on the street corner, homeless, or in prison.

Who are they?  Where are they going? What to they want in their lives?

They are our children, our future.  They also tell us a great deal about what America is and where we are headed, as a nation, and as a place to raise our children.

Several of his op ed pieces and essays have been published in The Oregonian, the Tillamook Headlight Herald, and Mentor magazine. An interview of Neal was in the February, 2013 local edition of The Ruralite, the monthly publication of the Tillamook Public Utility District. Several of his poems and short stories were published in the North Coast Squid, a regional literary journal.

You can listen to Neal read several of his poems at the Oregon Poetic Voices website.

He also plays guitar, gardens, is a photographer and painter, and enjoys walking on the beach and enjoying the Northwest.  He and his wife, Karen Keltz, author of Sally Jo Survives the Sixth Grade: A Journal, are the valets of two cats, and tend their garden near Tillamook.

Neal’s book is available at Amazon.com

Find Me On The Web